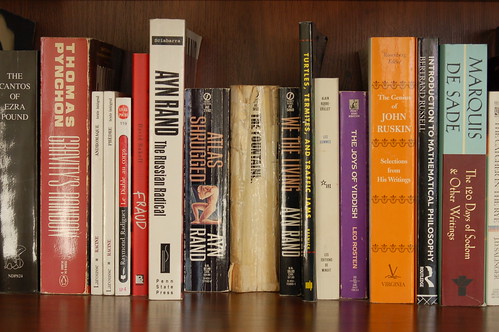 I've finished reading "Atlas Shrugged" again, mostly inspired by the references in the Bioshock game. I'm no objectivist, but I found again a lot likable in Atlas Shrugged. I was astonished about how the book is relevant even today. There are many good quotes in it, like this gem:

Did you really think that we want those laws to be observed?" said Dr. Ferris. "We *want* them broken. You'd better get it straight that it's not a bunch of boy scouts you're up againstâ€“ then you'll know that this is not the age for beautiful gestures. We're after power and we mean it. You fellows were pikers, but we know the real trick, and you'd better get wise to it. There's no way to rule innocent men. The only power any government has is the power to crack down on criminals. Well, when there aren't enough criminals, one makes them. One declares so many things to be a crime that it becomes impossible for men to live without breaking laws. Who wants a nation of law-abiding citizens? What's there in that for anyone? But just pass the kind of laws that can neither be observed nor enforced nor objectively interpreted â€“ and you create a nation of law-breakers â€“ and then you cash in on guilt. Now that's the system, Mr. Rearden, that's the game, and once you understand it, you'll be much easier to deal with.

With all the rescue packages for banks and automobile companies, the present reads a lot like the dystopian US in Atlas Shrugged. A Wall Street Journal article 'Atlas Shrugged': From Fiction to Fact in 52 Years' writes:

We already have been served up the $700 billion "Emergency Economic Stabilization Act" and the "Auto Industry Financing and Restructuring Act." Now that Barack Obama is in town, he will soon sign into law with great urgency the "American Recovery and Reinvestment Plan." [...] The current economic strategy is right out of "Atlas Shrugged": The more incompetent you are in business, the more handouts the politicians will bestow on you. That's the justification for the $2 trillion of subsidies doled out already to keep afloat distressed insurance companies, banks, Wall Street investment houses, and auto companies -- while standing next in line for their share of the booty are real-estate developers, the steel industry, chemical companies, airlines, ethanol producers, construction firms and even catfish farmers. With each successive bailout to "calm the markets," another trillion of national wealth is subsequently lost. Yet, as "Atlas" grimly foretold, we now treat the incompetent who wreck their companies as victims, while those resourceful business owners who manage to make a profit are portrayed as recipients of illegitimate "windfalls."

Ayn Rand got a lot of bad press for her books in the last decades - that it's only materialism that count. But all things considered, I don't think the book is about materialism, but about doing things. There are people who do things, and people who don't. It's about taking responsibility. About entrepreneurship. Perhaps this view I hold is from my role as a programmer, as someone who produces something which people use for something all the time (though sometimes things no one really needs 😉 It's Zen - don't scream, I have the feeling Zen and Atlas Shrugged are the same thing - perhaps on opposing sides.

But as recently as 1991, a survey by the Library of Congress and the Book of the Month Club found that readers rated "Atlas" as the second-most influential book in their lives, behind only the Bible

I really wonder why then, people don't do more. Why they don't act. But it fits with the WSJ article. The author

Some years ago when I worked at the libertarian Cato Institute, [...]

Funny. He loves Atlas Shrugged. But what has he done? What did he invent? What did he produce at Cato? As a writer for the WSJ? He is the archetypal anti-hero of Rand. Someone who doesn't produce something himself, but lives from the work of others. The wrong people like Atlas Shrugged!